Inorganic oxidizing salts are of special interest in safety and security applications as they are both oxidizers and indicators of possible explosive mixtures. The primary sales of interest are anions, such as nitrates, perchlorates and chlorates. The most common cation salts are ammonium, potassium, magnesium and sodium - although other metal cations can also be present.

The advent of portable Raman spectroscopy has generated interest in quickly identifying these salts in-situ for a rapid determination of threat levels at a location. There have been several comprehensive studies done to determine:

1. the feasibility of correctly identifying these materials

2. the selectivity of identifying the correct cation salts

This study was done to address these two issues - specifically as they apply to the Rigaku portfolio of handheld Raman analyzers. It should be noted that Raman's issues with selectivity of the counter cations are common limitations for any portable Raman instrument. Portable instruments provide clear advantages in rapid response on-site in many hazardous situations, but as a trade-off for the speed and portability - these instruments do not have the resolution of benchtop-type instruments. Most studies done on Raman spectroscopy and selectivity use high resolution benchtop instruments. While these studies tend to show feasibility of Raman spectroscopy identifying these materials, any selectivity issues will be present in a great amount for portable instrumentation.

The most common anionic salts of interest in safety and security applications are nitrates, chlorates and perchlorates. These are the main oxidizers as identified in CBRNE Tech Index and IABTI lists. These salts show characteristic spectra peaks that allow for differentiation in Raman spectra. Nitrates can be differentiated from chlorates due to characteristic N-O bonds. Chlorates can be differentiated from perchlorates due to the different number of bonds in these two salts, giving them different molecular geometry. As an example, the potassium salts of chlorates and perchlorates are shown below in Figure 1 (red is the chlorate; black is the perchlorate salt). There is sufficient peak separation and peak shape differences to enable the differentiation of the chlorate and the perchlorate from one another.

Figure 1. The nitrate and chlorate spectra also show sufficient differences to enable these types of salts to be differentiated and identified.

Therefore, even with the limitation of resolution present in portable Raman instrumentation, it is feasible to differentiate the most common types of anionic salts found in hazardous situations - nitrates, chlorates, and perchlorates. Note that this assumes that pure compounds are scanned. Mixtures tend to reduce differences amongst the spectra. Noise can also affect the spectra and limit the feasibility of identification.

SELECTIVITY OF THE CATIONIC SALTS

While the identification of the different anionic salts is relatively straightforward in most cases, the selectivity within each salt is inherently more difficult. Studies of benchtop-type instruments have shown that while the anion (nitrate, chlorate, and perchlorate) is influenced by the cation type, this s a very slight effect that results in only a slight shift in the anion peak position. Figure 3 below shows the nitrate salt with potassium, sodium and magnesium. Note there are only slight differences in peak position for the main peak and even slighter shifts for the small peaks. These small differences make selectivity very difficult for certain cation salts and preclude selectivity for a subset of cations. These findings were also reported in the cited reference which found that while the cation did influence the spectra so that a shift in the peak positions resulted - in some cases the shift was below the resolution limits of the instrument. The conclusion was that there were certain cation species that were not selective and not differentiable.

Figure 3.  Demonstrates the nitrate salt with potassium, sodium and magnesium.

Ammonium nitrate is a special case of the above cation - anion pairs. Ammonium nitrate shows the characteristic nitrate (N-O) peaks, but also has additional characteristic peaks due to the ammonium N-H covalent bonds. So in theory it should provide extra discriminating features from other nitrate salts, such as calcium or potassium nitrates, allowing the spectral resolution of these salts.

In practice though, there are a number of issues with ammonium nitrate that limit the spectral resolution. Reported peak shifts amongst the nitrates tend to be in the order of +/- 6 cm-1. This tends to be below the resolution of most portable instruments, typically ranging from 8-11 cm-1. This is one limitation to the selective identification of ammonium nitrate from its nearest neighbor (calcium or potassium nitrate). As an example, Figure 4 below shows ammonium nitrate and calcium nitrate. The main difference is in the slight shifts of the small peaks. Note that the correlation of the two materials is at 96%.

Figure 4. Demonstrates the peaks for ammonium nitrate and calcium nitrate.

Another issue is that the extra N-H peaks of the ammonium cation are small while the dominant peaks in the spectra are due to the N-O of the nitrate. Little useful information is provided by the N-H bands. Any physical changes to the ammonium nitrate sample tends to offset the advantage of the additional information. The physical changes that can change a spectra are typically due to particle size heterogeneity and moisture content. While water O-H peaks are not present in Raman spectra, the effects of moisture are. In particular, peaks tend to broaden and shift in the presence of moisture especially as the water hydration spheres surround the ions. The effect of moisture is illustrated in Figure 5 below showing the difference between a new, dry sample of ammonium nitrate (red) and an older sample which has picked up sufficient moisture to clump (black).

Figure 5. Demonstrates the difference in a new, dry sample of ammonium nitrate (red) and an older sample (black).

This is a common effect for ammonium nitrate as it is hygroscopic (picks up moisture easily). This results in peak shifts that, while slight, are often enough to cause selectivity issues with other cation salts of nitrates. Especially as noted above - when the peak shifts due to different cation salts are between 6-10 cm-1 - this tends to be less than the resolution of most portable Raman instrumentation.

Based on testing of different cation salts of the three main anion species (nitrates, chlorates and perchlorates) and supported by external references, the main points are:

1. Nitrates, chlorates and perchlorates are generally differentiated from each other based on the anion class. Both CBRNE and IABTI lists appear to recognize this and only list the general anion class with cations in brackets as general types. For example: an instrument identifies nitrates (K/Ca).

2. The identification of the nitrates, chlorates and perchlorates may not be selective with the specific cation as some of these may not be differentiated due to changes in physical parameters, limitations of resolution of portable instruments, or sources of noise in the scan or sample. As well for a subclass of cation salts with cation effect is just not sufficient to shift the peaks and allow differentiation.

3. Ammonium nitrate is a special case which makes it difficult to selectively identify with Raman spectroscopy. The additional spectral peaks due to the N-H are small and easily dominated by changes due to physical changes. While identified as a nitrate, selectivity of the cation is not always possible due to peak shifts/changes.

4. When building a library to identify chlorates, perchlorate or nitrate material for safety and security applications, it is recommended that library quality, traceable salts are obtained. As most nitrates, chlorates and perchlorates actually tested in the field are not of the same quality, the results should be used in such a way that recognizes the specific type of anion, but does not assume selectivity of the cation. For example, results should state nitrate salts, but allow for possible cations (calcium, potassium, or ammonium). 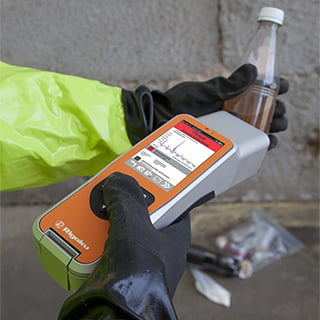